Two delegates went to convention this year. President, Jacqueline Hall worked at the convention as a returning member of the Resolutions Committee.

The hardest working committee at convention, it's all about grammar, spelling and intent.

Steward in training Mike Morin attended for his very first CUPE Convention. When asked what he thought of convention Mike said; " CUPE is constantly there to support it's members, and it's communities through initiatives such as the 10 Percent Shift. I came away with a felling of solidarity, knowing that the Union is there to support me, and knowing that CUPE members do the work that makes communities work."

When asked how his view of the Union has changed since convention Mike said; " My view has changed because I know I have more rights, 'What has the Union done for me?' is a myth because if it wasn't for Unions our wages would be crap, benefits would be slim to none, and the Employers could have their way with us. Knowledge is power! CUPE makes us strong!"

On becoming a Steward Mike said;" I feel I will be able to educate and advocate for our CUPE members!"

The Executive of CUPE 1622  is very pleased to have Mr. Morin's involvement and look forward to his future work as a Steward.

A moment of silence on Saturday April 28, National Day Of Mourning, in memory of those brothers and sisters that lost their lives in the past year.

Saturday Morning  the Delegates collected at Centennial Square in Victoria for a Day of Mourning Event.

It wasn't all work though, Mike joined up with the Young Workers for a Scavenger hunt one night. I discovered a new love for raw oysters, and there were one of two socials for networking! It was a great experience, maybe you can join me next year!!

The Local Executive wishes you and your families all the best this holiday season, and a very happy New Year.

There will not be a Local Union Meeting this month. There has not been much to update activity since the November meeting. The Executive has had a rough month, Vice President Melissa Bellingham was injured at work, and I was in a car accident. We are both on the mend, and thank you for the well wishes.

We had Bargaining Dates set for November 29 and 30, but due to my recovery from my accident on November 26 those dates had to be cancelled. We are currently trying to get dates for February of 2012. The Employer was not available in December and our CUPE Rep is out of the Country until the end of January. I will update you on new dates in the New Year.

There are only 2 Grievances still pending for 2012. One is in abeyance pending a resolution in Bargaining. The other is on an Employee Termination that the Local is dealing with.

It has been a busy year. The Local dealt with 13 new Grievances this year. There were some real advances made in Bargaining at the beginning of the year. We also received 2 National Rep changes, and two bargaining rep changes.

To see what has been going on at CUPE BC click here.

WorkSafeBC Caves to Late Night Retailers’ Lobby – Waters Down Grant’s Law
Vancouver, BC – WorkSafeBC announced today that safety regulations protecting employees working alone will be essentially revoked on April 15, 2012, a move that is being condemned by the family of Grant DePatie and the B.C. Federation of Labour.  The new stripped-down Regulation allows the employers to sidestep requirements that the door be locked and a window be used to exchange money and goods between the hours of 11:00 pm and 6:00 am, when employees are working alone.


The Regulation was named Grant’s Law in honour of Grant DePatie, a young gas station attendant killed on the job while working alone in Maple Ridge. At the time of its introduction, the Regulation was considered among the best in Canada.
"It is extremely disappointing to see WorkSafeBC sacrifice evidence-based safety regulations after a lobby based only on the profit motive of late night employers," said Jim Sinclair, President of the B.C. Federation of Labour. "This is a huge setback for some of the most vulnerable and lowest-paid workers in the province."
Doug DePatieWorkSafeBC scrambled to show they were taking action to protect late night workers, and doing right by Grant," said DePatie. "Two years later, with the issue out of the spotlight, WorkSafeBC is caving to employer demands to make workplaces more dangerous. They seem to have forgotten the negligence that led to Grant’s death."
Sinclair pointed out that many stores have two people working or lock the doors at night already. "Watering down safety standards rewards employers who aren’t concerned with the safety of their employees and punishes those who work to a higher standard."
In response to suggestions the new standards will still protect workers, Sinclair said that the best late night workers could hope for is that when they are robbed violently, they are lucky enough to survive and have their assault caught on video and their employer notified.
DePatie and Sinclair called on the Minister of Labour and WorkSafeBC’s Board of Directors to reverse the decision and do their jobs --- which is to protect vulnerable workers, not lower safety standards because of a strong business lobby from employers who do not care for the safety of their employees.
For more information, contact Michael Gardiner, BCFL Director of Communications, 778-836-2108

The Right to Know

Workers have the Right to Know about any potential hazards in the workplace. You have a right to training and information on machinery, equipment, working conditions, processes and hazardous substances.Example of a worker’s Right to Know:
You can ask the employer to provide information on:

The Right to Participate

The Right to Refuse Unsafe Work

Workers have the Right to Refuse work they believe is dangerous to their own health and safety or to another worker. The Right to Refuse Unsafe Work is one of the few exceptions to the “work now, grieve later” rule in labour relations.
Section 3.12 of the Workers Compensation Act (Canada Labour Code Part II - Section 128 & 129) includes the process for refusing work and employer responsibilities for responding to refusals. Legislation also provides workers with protection from reprisal from the employer.

The Right to No Discrimination

You cannot be fired or disciplined for participating in Health and Safety activities.Discrimination Defined:
Posted by 1622 Executive at 00:30 No comments:

I hope that you will all join me at the Union Meeting on Monday November 21, 2011. Our meetings are held in a meeting room adjacent to the Thirsty Penguin on the upper level of Canlan Burnaby 8 Rinks. The meeting starts at 7:30pm sharp, come early and join us for a bit of a social before the meeting and stay for some (Union bought) munchies after the meeting.

We will have a guest speaker this month, Brian Campbell, from the BC Federation of Labour. Brian will be speaking on the "Alive After 5" campaign about the importance of Health and Safety for new and young workers.

"On November 19 CUPE members in British Columbia have a rare chance to make a real difference for our communities.

November 19 is the day we elect our municipal governments and school boards.

We know that voter turnout is always very low for local government elections. That means that the 85,000 CUPE members in BC can make the difference if we and our families turn out to vote.

We can make a difference by electing municipal governments opposed to contracting out or privatizing our work. We can elect people who are committed to fair collective agreements.

Above all, we encourage you and your family to get out on November 19 and vote for progressive candidates in your community." Barry O'Neill, President CUPE BC

For a list of the labour endorsed candidates in your municipality please go to the CUPE BC website on Thursday November 17.
Posted by 1622 Executive at 21:27 1 comment:

We are entering a new era of technology! My hope is that this form of media will assist the Executive to communicate more effectively with you the members. We value any and all comments that you can provide on what kinds of information you would like to see. Thank you for visiting.

A week in review! The first week of November Melissa Bellingham and  myself (Jacqui Hall) attended CUPE's National Convention. It was held at the Vancouver Convention Center. There were over 2000 delegates from across Canada in attendance, representing the over 610,000 members of CUPE from across the country. 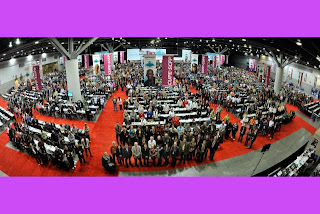 As you can see there were alot of us there. There was alot of business conducted. Brother Paul Moist was re-elected as CUPE president, Brother Paul Genereux retired from office as Secretary Treasurer. Brother Charles Fleury was elected the new Secretary Treasurer on the Third ballot. The Strategic Plan was debated at length, and even our Mel B got up the courage to speak at the mic.